This gang of stooges was waiting to be disclosed as a sidetrack from my Munich 1972 hoax essay. I had a few bookmarked entries so this text came together a lot faster than I though it would.

As a caveat, I did not make up my mind about the victims of RAF actions. Whether any or all of them are real was not in my scope, no research was done to check their legitimacy. I could only speculate and express my doubt about them, but will refrain from doing so for now. Maybe I will spend some more time in the future dealing with them, if I get motivated enough.

I divided this text in a few parts and did not put too much words into describing what I found as the evidence brought forward speaks for itself.

There is as presequel story to the rising of RAF and Movement 2 June. It is about “The gunshot that changed Germany“, where on June 2, 1967, a West Berlin police officer shot and killed leftist demonstrator Benno Ohnesorg. I will touch on it later in the text, this is just to put RAF into the perspective of events going on during late 60’s in West Germany.

Listed here are founders and early members of the Baader Meinhof gang:

An interesting lead is also the last name of Köstlin, which links us to Emma Johanna Henny “Emmy” Sonnemann, who in 1916 married an actor Karl Köstlin in Trieste and then divorced him 10 years later only to marry . . . Hermann Wilhelm Göring, who was himself jewish, just as Hitler or Himmler, Naturally, Karl is completely scrubbed at geni.com.

Horst Mahler – mother Dorothea Mahler (nee Nixdorf), father was Willy Mahler, a fanatical Nazi. Dorothea’s brother, Reinhold Nixdorf was an SA-Obersturmführer, who got arrested and executed in the alleged Röhm putsch in 1934. Horst is a German lawyer, who earned his reputation for defending young left wing activists in the late 1960’s. His record was impressive; Willy Brandt’s eldest son Peter was a client, as were Fritz Teufel and Rainer Langhams, as well as both Baader and Ensslin. As his politics grew more radical, he helped mastermind alleged Baader’s prison break in 1970 and a subsequent series of alleged bank robberies designed to fund their movement. By the end of the year, he fled to the terrorist training camps of the PFLP in Jordan along with the other members. In 2011, the Guardian reported that Horst Mahler, »may have worked for the Stasi« as informant until 1970.

Why is RAF called Baader-Meinhof Bande in Europe? Ulrike Meinhof was not the co-leader of the first generation, it was Baader’s girlfriend Gudrun Ensslin, so Meinhof was just the speaker for the group (as an ex-journalist).

How is it that some of RAF members have genealogy records going back centuries, while others are completely scrubbed?

At the end of the Cold War, hundreds of thousands of previously secret documents were uncovered detailing the operations of the Stasi, the East German secret police. Among these was information, which showed how the Stasi had worked with the RAF over a period in the late 1970s and early 1980s.

The uncovered documents implied that the Stasi allowed RAF members to live in East Germany when they wanted to leave the group, providing them with new identities. There is also evidence that they trained them in the use of anti-tank missiles at the time of a failed assassination attempt on US army general Frederick Kroesen and alleged bombing of US army base Ramstein in 1981 . Kroesen’s car was attacked with a rocket propelled grenade, but he survived. If you believe that, I don’t know what to say, really. So what does an armored car hit by an anti-tank grenade look like? 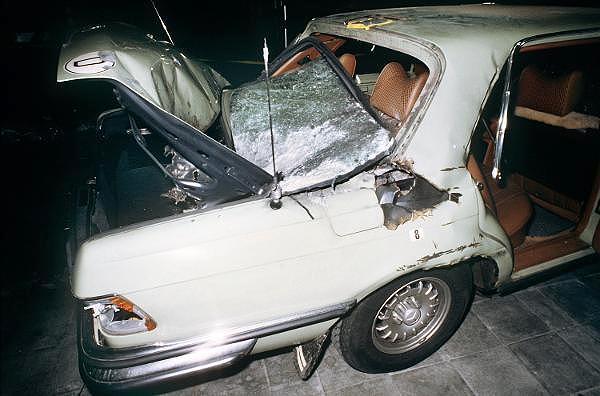 The car doesn’t look even slightly burned or marked by the trace of an explosion, does it? So I reckon it must have been some special kind of grenade used in this particular case, which spew out ice instead of fire.

[Update 2/11/2019: A reader has posted a very conclusive comment below, making five very distinctive points about Kroesen’s car pictured above. I edited form and added a few words for more clarity:

The car is not Kroesen’s vehicle, however.

2) No layered glass (if I see this right. But not sure on that one.)

3) Kroesen was Commander. Means: must have had driver. Means: occasionally, he’d sit in front. On a sheep’s skin???

4) Spiegel 39/81 reports the car to have been green. Makes sense: Military.

5) The vehicle of a US Military CIC would not sport the signage of the host country (“D”; as for Deutchland). It would show a military identification which would not correspond with the “D”. Vehicles not registered locally, for obvious reasons.]

I really can’t figure out how can anybody believe the utter nonsense they’re trying to sell us here. But there is more to wonder about following Wickypedia’s entry of the same event:

“Responsibility for the attack was claimed by the “Kommando Gudrun Ensslin” of the Red Army Faction (aka Baader-Meinhof Gang). In 1991, West German prosecutors announced that former East German secret police leader Erich Mielke had been indicted for collusion with the attack.”

This is the picture of Gudrun Esslin:

Does she look anything like a commando to you? Capable of carrying and firing an anti-tank rocket propelled grenade to kill a general? I don’t. By the way, in the same sentence Wickypedia admits East German intelligence service was collaborating with the perpetrator. Or were the STASI agents in fact involved in staging a failed attack, while the pretty girl only served as a patsy? The answer is obvious, no doubt, so as usual it is heavy dose of lies sprinkled with some bits of truth. It is how they play with your intellect and create history on the fly.

If you still don’t believe me, you should read what mainstream media mouthpiece New York Times published in an article. In it they were reporting that five arrested ex-Stasi officers conspired with RAF to attack an American army base and kill an American general (as was the case in 1981 alleged bombing of Ramstein US army base and failed assassination of Frederick Kroesen).

Another condemning revelation comes from Ulrike Meinhof’s daughter, Bettina Röhl, who published a book in 2006.  Bettina claims that “Konkret”, the far-left magazine, published by her father and edited by her mother, was for many years wholly financed and directly controlled by the East German government. The magazine was far from being a free voice of dissent. In other words, it was, at least in the early 1960s, an out-and-out East German propaganda organ and Röhl’s father was, in Bettina’s own words, a bought-and-paid-for “useful idiot”, who accepted 40.000 Deutsche Marks per issue for following the Honecker regime’s orders. Later, Röhl was able to document the regular transfer of funds from the East German government to the RAF.

OK, so we’re apparently dealing with secret service operating a manufactured left-wing terrorist group, with a perverted goal to create dissent among people. If so, there must be some indication of this from the early beginning of RAF. There sure is and it also connects the dots; “The gunshot that changed Germany” was the job of an intelligence field agent. We can find some traces of this at Wickypedia:

“Karl-Heinz Kurras was a German police inspector, known primarily for fatally shooting unarmed student Benno Ohnesorg during a demonstration on June 2, 1967, outside Deutsche Opera against the state visit of Mohammad Reza Pahlavi, the last Shah of Iran. The incident is considered pivotal for the rise of left-wing terrorism in West Germany during the 1970s, culminating with the Movement 2 June and the Red Army Faction. . . In May 2009, it was revealed that Kurras was an informant for the East German secret police, the Stasi.”

Well, the whole story of lies finally makes sense with the last quoted sentence, which I bolded. Of course, it was PTB’s flavor of intelligence service, its plan and execution of one, something as important as creating a phantom terrorist group is not left to a bunch of amateur journalists, lawyers and high-school dropouts. Such modus operandi reminds me of . . . Al Qaeda, ISIS, IRA, Black Hand, Black September, and many others. Some of those gangs just mentioned are still under-researched to be certain, but the pattern fits.

A link between PLO and RAF

The link between the two organizations is directly admitted at Wickypedia too, you can find it at Andreas Baader’s entry, which I will not link to. Before reading and learning any of the following have in mind, that one of these two gangs, RAF, was apparently run by intelligence. What are the odds that PLO never found out about RAF’s connections to government and executed all RAFists for treason? What are the odds then PLO wasn’t another intelligence arm?

Although they will try to misguide you at Wickypedia’s entry, telling you Baader (and others) was staying at Fatah training camp before being expelled due to “differences in attitudes”. What you need to know is that Fatah is the largest faction of multi-party PLO, Palestinian Liberation Organization, and another Arafat’s military sub-division. But answer this for me, how can two brotherly gangs, united in fighting against Israel and jews, have any differences in attitudes?

There is another devastating MS media admission of what was really going on with RAF and their “terrorists”, where they say:

“The officials described the West German terrorist movement as being in ”very poor shape.” There are 13 so-called hard-core members of the Red Army Faction still at large; the officials believe perhaps 550 sympathizers and friends, as opposed to full-time activists, now live in a dozen West German cities.“

And then following with:

“Senior West German security officials possess ”clear indications” that a number of fugitive members of left-wing West German terrorist groups are hiding under the protection of the Palestine Liberation Organization in areas it controls in Lebanon.

The same officials also reported that despite denials by the P.L.O. they suspect the Palestinians have given training to right-wing West German extremists involved in neo-Nazi paramilitary organizations.“

The article also mentions how their “terrorists” were arrested and released, moving between different European states and Middle East. One of the ex-terrorists, Michael Baumann admitted he “was talked to by the police there and then was allowed to continue on his way”. That is just over the top, isn’t it? In my opinion, it is not a stretch too large to make, that PLO was run by some flavor of intelligence service.

In fact, one of Fatah’s most prominent leader was Mohammad Yusuf Dahlan a.k.a. Abu Fadi, where at his Wickypedia entry they admit that he:

“was arrested by Israel 11 times [during 5 consecutive years] for his leading role in the movement. During his time in prison, he learned to speak Hebrew fluently… He built up a force of 20,000 men, making him one of the most powerful Palestinian leaders, dealing regularly with the CIA and Israeli intelligence officials”.

OK, so we have a leader of biggest PLO faction dealing with Israeli intelligence (MOSAD?) officials, who do not mind he is terrorizing Israelis? So they arrest and release him 11 times? And he speaks fluent Hebrew, self-thought while in prison? The only thing that rings as true to me is that he is regularly in touch with his handlers, which makes him an agent. If he does speak Hebrew fluently, I’m almost certain he did not learn it while in prison. You know why? He was locked there for too short at the time, remember, being arrested and released 11 times in 5 years while leading Fatah doesn’t leave much time for studying language of one’s enemy.