I turned on my radio in the morning and there was a lady host talking about the events that happened on 23rd of December throughout recorded history. As she was talking about some events I don’t even remember anymore, she mentioned the airplane crash/accident/incident of Andes, that famous / notorious aircrash that happened in 1972. Allegedly, an airplane with entire Uruguay football team and other passengers got into a bad weather and crashed somewhere in the high Andes region, I even remember watching that movie » Alive« when it was released. As the speaker on the radio mentioned few facts about it, I caught myself laughing – the event occurred on Friday, 13th of October 1972 (1+3+1+0=5, 7+2=9), there were 45 (9×5) passengers at take off , 16 survivors (1+6=7), 29 dead (2+9=11) , all remaining survivors rescued after 72 (7+2=9) days on 12/23 1972. Although I laughed, there was a second thought to it and I certainly didn’t want to make fun of those people, who may have actually died there. So the joyride began, I dug into it.

First stop was at Wickedpedia  and immediately some more numerology jumped at me – the unlucky flight was Uruguayan Air Force Flight 571 (5+7+1=13). But that may all be just coincidental numbers, meaning nothing in particular, so let’s look at some more details.

I found the following pictures at the official crash website and at the sites of two alleged  survivors of this reported incident (here and here), lets look at the first of them:

Here is the same photo in color version : 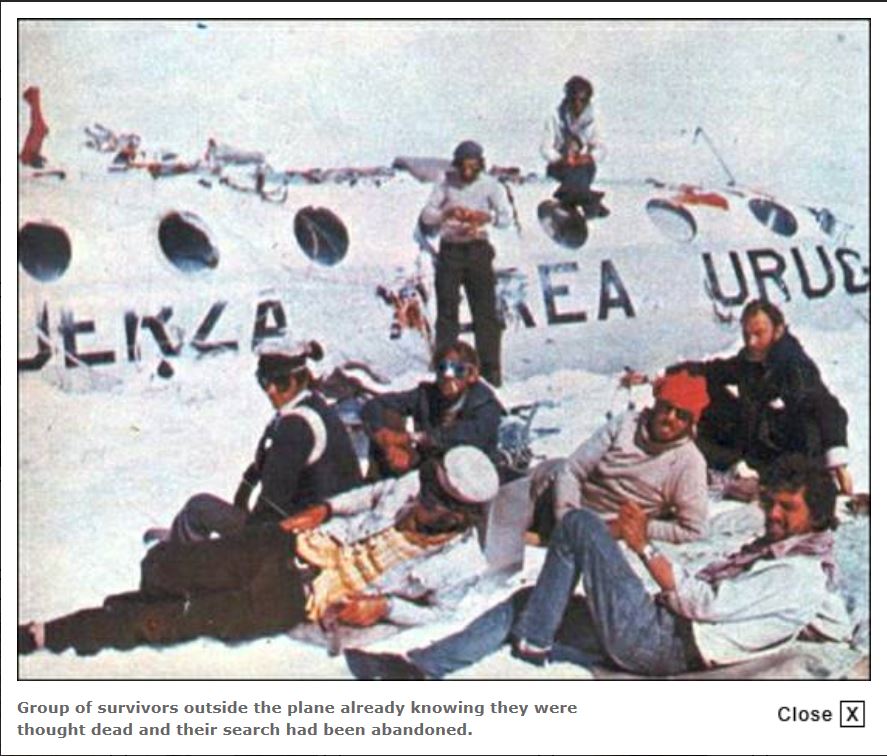 I’m not an expert in photography and photo-analisys, but it makes my head wonder why is it that the color version of the same photo is of much lower quality then B&W photo? I was not able to find the same photo in color version of higher quality anywhere on the net. Anyway, there are two subjects to be mentioned here: the time of the incident was from 10/13 till 12/23 , which means that it was early in beginning of spring until beginning of summer in Chile, so nobody was equipped with proper winter clothing.

If you look at the temperatures for 23rd of December 2016 (source, for the area of Tinguiririca, Chile, in close vicinity of crash site) this is what could be read: 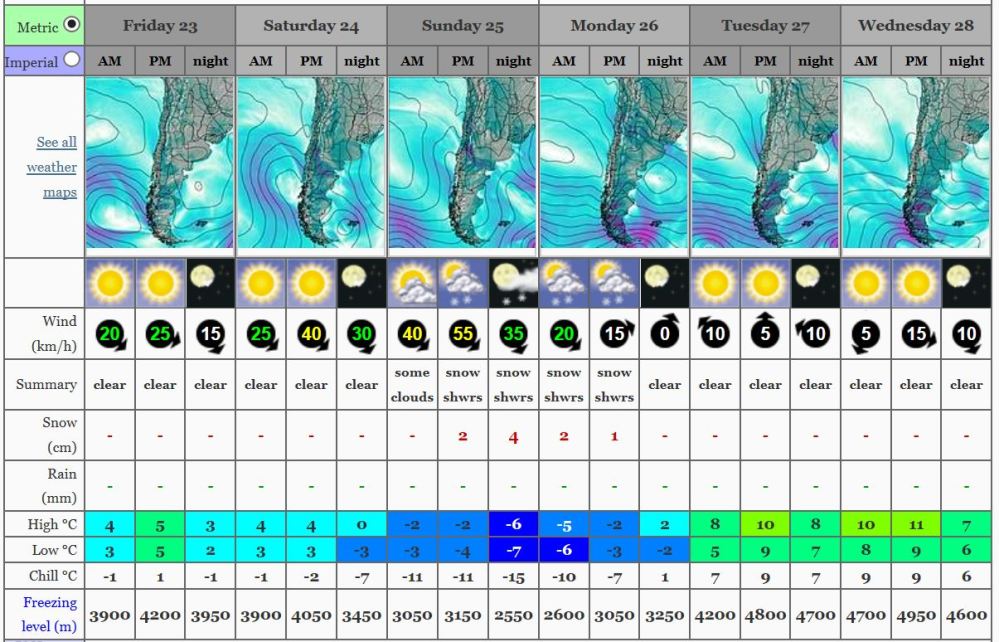 You can notice that the daytime temperatures do not exceed 4 –  5 degrees Celsius and can even be even below zero values for December 2016, with unknown values for the spring/early summer mountain region values of 1972 (one of the survivors said in the interview that the temperatures were up to 30 degrees Celsius below zero). During October and November temperatures are logically lower, with values most probably below freezing point even during the daytime, to which you can add the wind that significantly magnifies the effect of cold weather. Realizing as well, that the survivors of the crash did not have the appropriate winter clothing nor enough food to last for more than a few days, anybody should be preserving body temperature and limit motion unless necessary to do otherwise. But here we see 8 of them, majority of who are lying in the snow, one of them even posing on the top of the fuselage – all seriously underdressed, the guy closest to us in the picture in white jacket and blue jeans has even his left foot in the snow, up to his ankle. Really ? But it still doesn’t mean anything, it could be all circumstantial and just plain foolish. If you have ever been to high altitude yourself though, you should know that it is a rule to preserve your body temperature by any means. To add my own high altitude experience – at 3600m in French Alps, usually from end of April to beginning of May in years 2001-2005, I could and would not sit around dressed in sweater and thin jacket, even on a sunny windless day for more than few minutes. The air is just to cold to allow it, with sanity at 100% as default. With no gloves on, you cannot even light a cigarette after 5 minutes of exposure to the cold air…

Let’s look further at this picture:

It most surely looks and feels as the pictures from the early days of photography from i.e. end of 19th century. Look at the 3 guys in the right , they all seem to focus somewhere to the right from the camera focus, with only the guy with the white hat looking  approximately towards the camera. If you look at their facial expressions, they most certainly do not look shocked or disturbingly worried, do they? On top of it, the surroundings in the picture can’t confirm they are supposedly inside the plane’s fuselage , with one of them wearing what appears to be more of a winter jacket. I hope it was him who went to the hike to bring in the rescue…he should at least be better prepared to endure the hike to the rescue in harsh Andes temperatures? 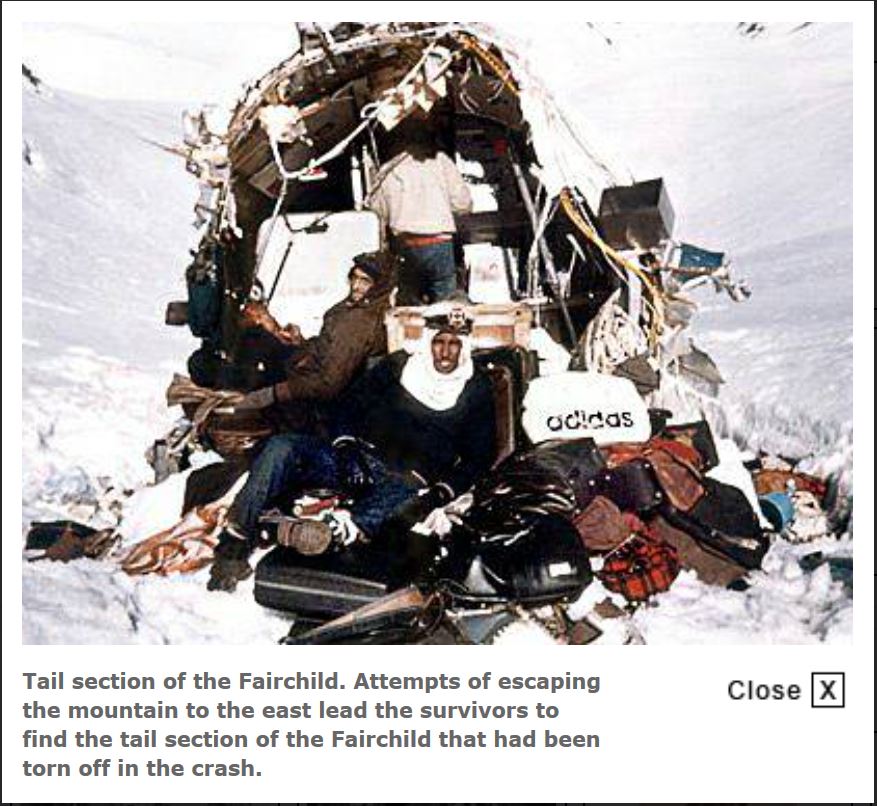 The picture above is the only one found so far that connects high mountain scenario with the scenery of fuselage we can see in other pictures. However, if you zoom into this low pixel value picture, you can easily notice couple of things: all of them have some kind of strange white colored glow around them, as if a layer of almost invisible thing would float around their bodies. The pixelation of white color around those lying in the snow is somewhat different then the rest of white (snow) above and to the right of it. It looks badly tampered with, I wish a picture of higher quality was available to scrutinize it. (Some more experienced viewers may find more markers of editing in all posted pictures.)

Notice the guy to the right in the picture, sitting half-naked in the sun, the note below the picture says it was taken in mid-November – temperatures were most likely below zero Celsius even during the day, maybe on exceptionally warm day with temperatures up to a few degrees above zero Celsius. Would you take of your clothes to get some tan? Or in order to pose to a friend? Hungry and cold most of the time, I somehow strongly doubt anybody would think about it in reality. Besides, in the lowest picture, there are no letters on the side of the fuselage meaning they must have taken the picture on the other side of the fuselage. Possibly so, but there is one another detail here that bothers me in that same picture: if you look at the guy with a white jacket and a hood over his head – just above his head, on the side of the fuselage, something strange can be noticed – on the left from the guy along the fuselage, there are clearly visible lines that are there (most probably as visible separate parts put together as fuselage), but from the guy and to the right on the fuselage – there are no more visible lines on the fuselage. Possible because of the angle and lighting conditions? It sure looks edited to me. If you take notice about all the pictures, besides the fact that snow can be seen around, there is absolutely no confirmation about the alleged altitude of 3.600m in the pictures, showing them being trapped high in the Andes.

Here are 3 pictures out of 3 (that I was able to locate on the internet) in total taken from the helicopter(s) at the time of rescue:

Again, there is no way to confirm the high altitude environment of 3.600m by looking at this picture. Since this last picture is the only picture that shows the fuselage in its entirety , it is hard to tell about the previous color-picture as whether it was actually taken from the other side of fuselage visible here. It is most surely hard to guess.

Then here is the following picture:

If you look at the shadow projected by the man on the left and the one on the right, you can notice that their shadows are consistent with the angle of lighting / sun above and left of them. However, what is obviously missing is the shadow of the man in the middle – his shadow should have been cast on the guy to his left (our right) or slightly behind him on the snow, but there is no shadow there. Here at least one can notice the part of the mountain in the back, to the upper right of the picture, but then I wonder how come that the sky in the back (to the right) of the mountain would look white (the same as the snow below)? Just another circumstantial lighting issues? And this topless posing for the cameraman by the guy in the middle, with kind of cheerful facial expression, just doesn’t confirm the alleged circumstances.

All the survivors allegedly admitted that they were consuming human flesh in order to survive. So they supposedly turned into cannibals, terrifying the world with it. As Wickedpedia suggests, some rationalized the act of necrotic cannibalism as equivalent to the ritual of Holy Communion (also called Eucharist, Lord’s Supper and other names) or justified it according to a Bible verse (no man hath greater love than this: that he lay down his life for his friends). As one can as well learn there, the Eucharist as the Greek noun εὐχαριστία (eucharistia), meaning “thanksgiving”, is not used in the New Testament as a name for the rite; however, the related verb is found in New Testament accounts of fthe Last Supper, including the earliest such account:

For I received from the Lord what I also delivered to you, that the Lord Jesus on the night when he was betrayed took bread, and when he had given thanks, he broke it, and said, “This is my body which is for you. Do this in remembrance of me”. (1 Corinthians 11:23-24) .

As it looks, considering all that can be read and seen in the pictures, with all we know now, I’d say this event in its entirety is a media concoction with a harsh meaning indirectly communicated to whole Christian populus around the globe: “Here, look at them Christians, they’d eat their dead to survive !”. How convenient, isn’t it, to have a chance to further blackwash Christianity? Have you ever seen modern TV voyeur big-brother-like show, where competitors are put into harsh environment (some remote island) for 60+ days? That’s my guess here with the 571 team – they were put around a broken fuselage somewhere in the mountains, in the middle between Uruguay and Chile, not to high up though and they had to last for a few days on scarce food supply. Maybe it was originally just some kind of psychological experiment turned as a major event hoax afterwards, as the Rulers realized it can be abused to manipulate with. What is the most difficult to understand is why would anybody trapped and with no other option than surviving as a cannibal – wait for rescue for 62 days before sending for help? It’s just so irrational, lust for life is a much more intense force than what we are forced to believe with such proposal.

I didn’t have the guts to check – what was this diversion turning our heads away from back then in 1972?

14 thoughts on “The Miracle of the Andes”